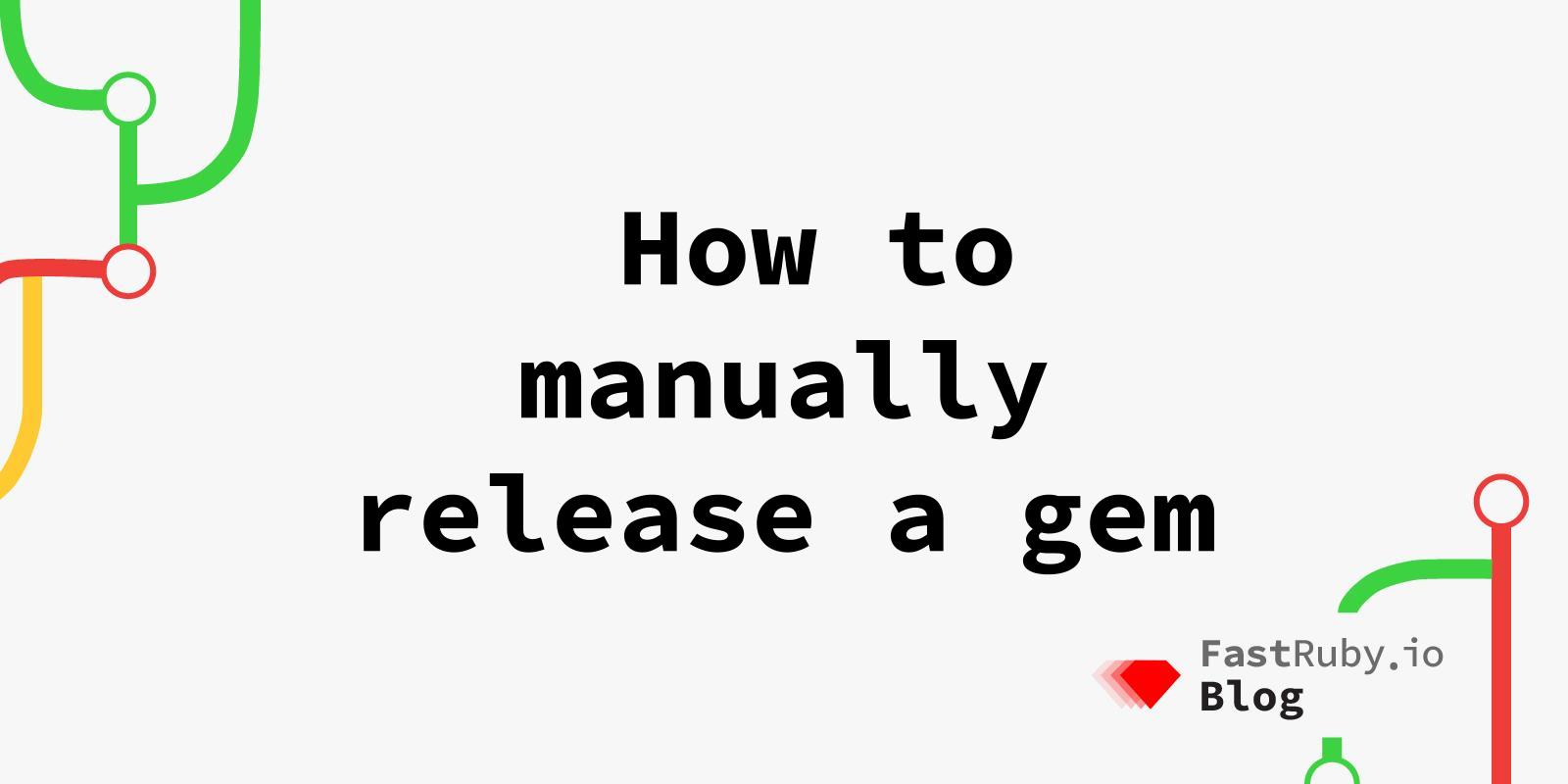 How to Manually Release a Gem in rubygems.com

I’ve always wanted to create a gem that becomes popular enough to be well known and everybody speaks about it. Unfortunately, until now it has been only a dream. In the meantime, I’ve learned how to create and release gems manually and I’d like to share that with you. Maybe somehow your gem could be the next most popular gem and I’ll be super proud of that if your first step was to read this blog post.

While writing the Release a Gem Manually section I realized that you may not have your gem yet. That is the reason I’ll share with you how to create it.

Everywhere you see fastruby_test, feel free to replace it with your gem’s name

A gem could be generated by manually creating each file or using a command. Let’s use the command.

The above command will prompt you with several questions and the answers those depend on your preferences. In our case we picked:

Nice! You just created a new Gem! Isn’t it incredibly easy? It’s time to prepare the gem to be deployed.

It returns that the fastruby_test.gemspec is not valid. You need to open that file and change the items that have the TODO: word, like so:

Once you fixed the gemspec file, run the tests again and you will see that the test is still failing. This is due to the scaffold creating a failing test by default. Let’s remove it or fix it.

You’ll need to have a rubygems.org account. If you haven’t created one yet, here you have the link to do it.

Then we need to login to rubygems.org from the command line, by running the following command:

It will prompt you to answer some questions, be aware that you cannot mark everything as y.

Just to confirm you added it successfully, go to the following route https://rubygems.org/profile/api_keys and the new api key’s name should be there.

The next step is to build the gem, running the following command:

The gem build fastruby_test command created a new file, in my case it’s called fastruby_test-0.1.0.gem (the version could vary on your side).

Let’s push it to the https://rubygems.org page with the following command:

If everything was good, you should be able to navigate to the gem url https://rubygems.org/gems/fastruby_test.

And we are done. That’s it. We are planning on posting an automated release in the future, let’s keep in touch if you are interested.

I wanted to jump into the Generate a Gem section but naming your gem is a super important step. Before you pick a name for your gem, do a quick search on https://rubygems.org/ and https://github.com/ to see if someone else has taken it or run the following command:

Every published gem must have a unique name.

Because of several reasons you may want/need to remove a gem’s release. Take into account that we won’t be able to use the same previous gem’s version. In our case it was only for learning purposes.

You can execute the following command:

Ruby on Rails developer from Oaxaca. He loves solving problems with Ruby and JavaScript. If you enjoyed this article, follow me on Twitter!