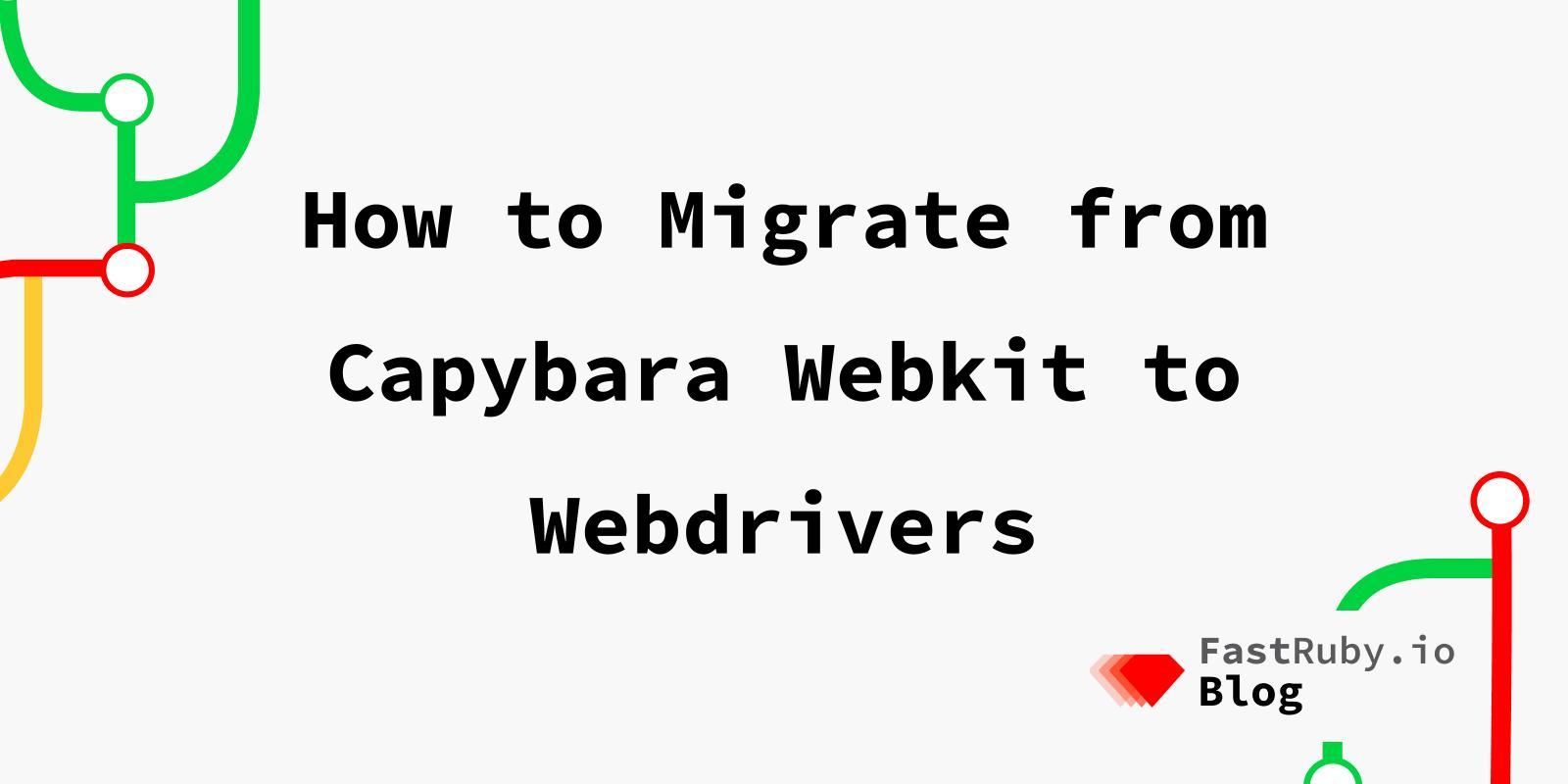 How to Migrate from Capybara Webkit to Webdrivers

We all know testing is important. We have our unit tests and integration tests to make sure everything is working as expected. At OmbuLabs, we use Capybara for our integration tests so that we can interact with the app as a real user would.

This is the process we used to replace the capybara-webkit gem in a legacy project with a more modern approach that uses the webdrivers gem and a headless browser.

By default, Capybara uses rack-test as the driver. Unfortunately rack-test does not support JavaScript. If we want to test things that rely on JavaScript, we need a driver with JS capabilities. Some of these drivers open up a web browser and show us all the activity.

Having the browser show up while the tests are running is not that practical and usually quite slow. The good news is that we can use headless features on browsers like Chrome or Firefox (even Edge). A few years ago the available options were mainly PhantomJS or capybara-webkit (which uses QtWebKit), but these options had its development suspended.

We will divide this change into 4 different steps:

First of all we remove capybara-webkit from the Gemfile and then replace it with the webdrivers gem (which is already included in any new Rails project).

This project was old so it also had an old capybara version that won’t automatically register the browser drivers that we want so we had to register the headless browsers’ drivers in our capybara config:

Then we can tell Capybara to use one of those drivers for all the tests that require JavaScript:

We had an extra step here because a lot of specs had the drivers specified on the actual test describe block like this:

Instead of replacing the driver there, we just removed that option on all the tests so it uses the base config we set above.

Finally, before you run your test suite, make sure you have no references to capybara-webkit in your code (search for capybara-webkit, Capybara::Webkit and :webkit strings).

We first make sure tests are working locally so we don’t have errors due to a misconfigured container.

This application uses an old version of Chosen to customize the select tags. The test suite includes a helper method so the driver can select options from that custom select and that helper method started failing.

We were using a helper method from this gist that relied too much on page.execute_script and page.evaluate_script. The solution for this was to use a different method calling only capybara methods to actually mimic the user interactions.

On top of updating the gem, we improved the test suite by avoiding obscure JavaScript calls.

Now that our tests are passing we can update the Dockerfile removing the commands that installed QT’s libraries qt5-default and libqt5webkit5-dev (that will depend on the OS your are using, we have a Debian image so we just removed those packes from the apt-get command).

Then we make sure we have Mozilla Firefox or Google Chrome installed. It was easier to install Firefox since the firefox-esr package was already available on the Debian Buster image we were using. You can use a Docker image which includes other browsers or install Google Chrome if you want to.

So we changed the default driver to use Firefox:

Now our tests can be run inside Docker and we are all green.

The last part of the process was to make sure the tests pass on the CI system. We only needed to make sure Firefox was available when running the test, so the easiest solution for this was to use a CircleCI’s Ruby image and use the correct variant so it also includes the most used browsers:

We did have some problems related to caching, so you may want to try to retry your CI job without caching just to make sure if you see something failing.

To sum up we got rid of an outdated dependency (capybara-webkit) which depended on QT and replaced it with webdrivers which depends on modern web browsers (e.g. Firefox). And we highly recommend you do it in your legacy Rails applications!

It makes it easier for new developers to join the project, installing QT is quite complicated on some OSs (https://github.com/thoughtbot/capybara-webkit/wiki/Installing-Qt-and-compiling-capybara-webkit) and Firefox (or Chrome) are usually already installed in any web developer’s environment.

It also makes it easier to maintain our Rails application and it gets us closer to “the Rails way”. It will help us when upgrading Rails because more recent versions of Rails use the webdrivers gem by default.

Another advantage of replacing QtWebKit with a major browser like Chrome and Firefox is that it helped us to find a bug in our current test suite. We had not been properly testing the interactions of the user in those tests related to Chosen, but now we fixed that.

And finally, we can run the complete test suite using different browsers (webdrivers support Firefox, Chrome, IE and Edge) just by changing one configuration if we need to.