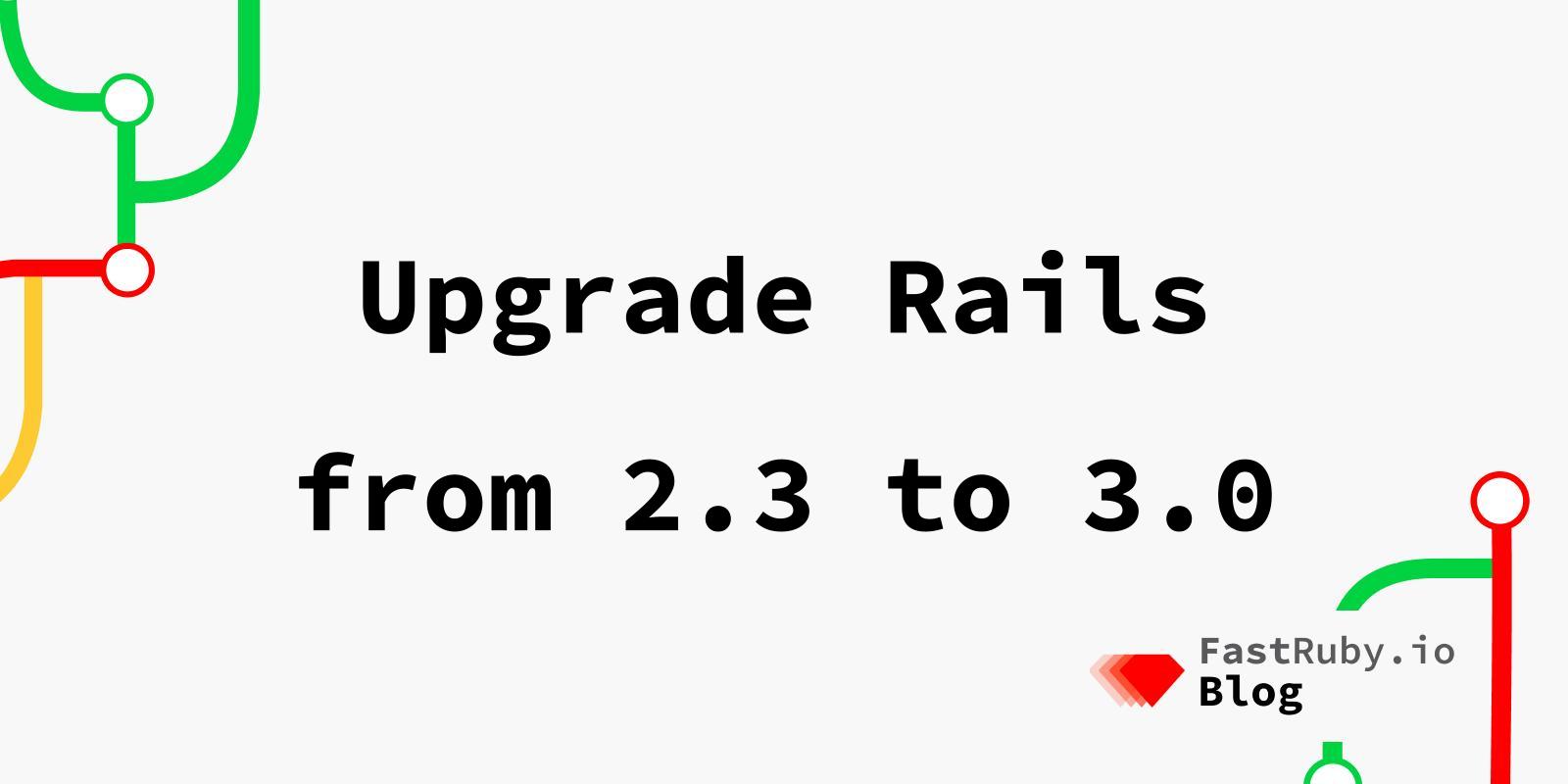 This article is the first of our Upgrade Rails series. We will be covering the most important aspects that you need to know to update your Ruby on Rails application from version 2.3 to 3.0.

There is an official plugin that helps the upgrade process. You just need to install the script by doing script/plugin install git://github.com/rails/rails_upgrade.git and then run rake rails:upgrade:check to see most of the files you need to upgrade in your application. It also provides some other generators to upgrade specific areas in your app, like routes or gems.

In this version, Rails automatically adds XSS protection in order to escape any content, so you will probably need to update your templates according to this. Luckily there is an official plugin for this. We recommend you take a look at this.

In terms of routes, there are a couple of changes that you need to apply to your routes.rb file. For example:

If you installed the plugin mentioned in step 3, you can run ‘rake rails:upgrade:routes” to generate a new set of routes. You can go to this article to read an in-depth article about this topic.

Bundler is the default way to manage Gem dependencies in Rails 3 applications. You will need to add a Gemfile in the root of your app, define all your gems there, and then get rid of the config.gem statements.

Remember that if you installed the plugin mentioned in step 3, you can run rake rails:upgrade:gems. This task will extract your config.gem calls and generate code that you can put in your Gemfile.

If you are using RSpec 1.x for your tests, you should update to RSpec 2.x. You may need to update some references to Spec with RSpec.

If you don’t need to load a module (let’s use actionmailer as an example), in Rails 2 you would use a configuration like this in your environments.rb file:

For Rails 3 you need to remove that and change how you require rails in your new application.rb file:

In Rails 3 you no longer need to use the h helper method to escape HTML. It is now escaped by default. If you need to tell Rails to not escape the HTML you will need to call .html_safe on that string.

There are a bunch of deprecations that happen during this version:

Block helpers that use concat (e.g., form_for, form_tag) will need to replace <% with <%=. The current syntax will continue to work for now, but you will get deprecation warnings since it will go away in the future.

AJAX JavaScript helpers have moved to be unobtrusive and use :remote => true. Depending on the helper call, some JavaScript event listeners may need to be added. For example:

Will need to change to:

And a JavaScript event listener will need to be added for what “update” is doing.

Since Rails 3 is closer to Rack, the Metal abstraction is no longer needed.

This is the official explanation of what you need to do to update your existing Metals:

For the future, you can use ActionController::Metal to get a very fast controller with the ability to opt-in to specific controller features without paying the penalty of the full controller stack.

Railties deprecates the following constants during this version:

Also, PLUGIN/rails/tasks and PLUGIN/tasks are no longer loaded all tasks, now must be in lib/tasks.

After you get your application properly running in Rails 3.0, you will probably want to keep working on this Rails upgrade journey. So don’t forget to check our complete Rails upgrade series to make that easy.

If you’re not on Rails 3.0 yet, we can help! Download our free eBook: The Complete Guide to Upgrade Rails.