This year I had the honor to speak at RubyConf in Nashville. It was my second time attending the conference and first time as a speaker. I talked about skunk, a gem to calculate the StinkScore of a module or set of modules.

Since its inception, skunk has changed quite a bit based on real usage in our productized service for Rails upgrades. As a matter of fact, the night before my talk I realized there was a BIG error in our formula.

Here is a description of the problem and solution.

I was doing some tests the night before my talk and noticed unexpected results using Skunk version 0.3.0. In my example, I wanted to show that simplifying a messy piece of code should show me an improvement in the stink score average.

The problem was that as much as I improved the code, the stink score average would only go up. This meant that the metric was lying to me. (And I was like WTF?!?!)

This is the project that I used for my example: https://github.com/fastruby/gggiiifff.com. It is an open source Roda application that basically consumes the Giphy API to find the gifs you are looking for.

When I ran skunk on this project, I got this summary:

In my test, I was trying to reduce complexity for the most complicated file (models/query.rb) by removing code from that file (yes, I know that if I remove these lines the application stops working, but it was a change to prove a concept)

In theory, removing methods from a module will improve its stink score because then we have less code to maintain. (read more here to know how it works)

In practice, I was seeing the StinkScore get worse with every git commit:

The formula for AnalysedModule#stink_score in Skunk v0.3.0 looks like this:

The problem with this is that churn should not be considered when you are trying to improve the stink score, because churn has too much weight when calculating the stink score. If we were to include churn in the formula, we should make that value weigh less.

This is what the stink_score over time looks like: 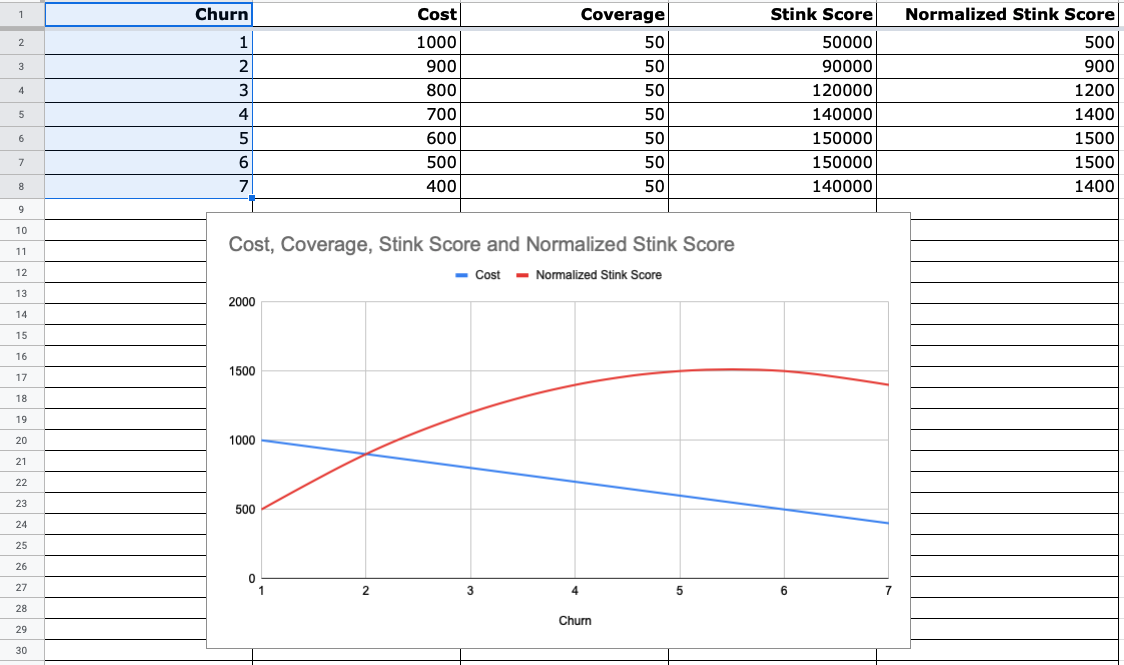 Every change that you make, reducing the cost by 100, is actually making the stink score worse.

So, the night before my RubyConf talk, I decided it would be best to remove churn from the stink score formula.

This is what AnalysedModule#stink_score looks like in Skunk v0.3.1:

It is pretty straight-forward: There is only one penalty factor which is relative to the lack of code coverage in the module.

Using this new formula and the same example, this is what the stink_score over time looks like: 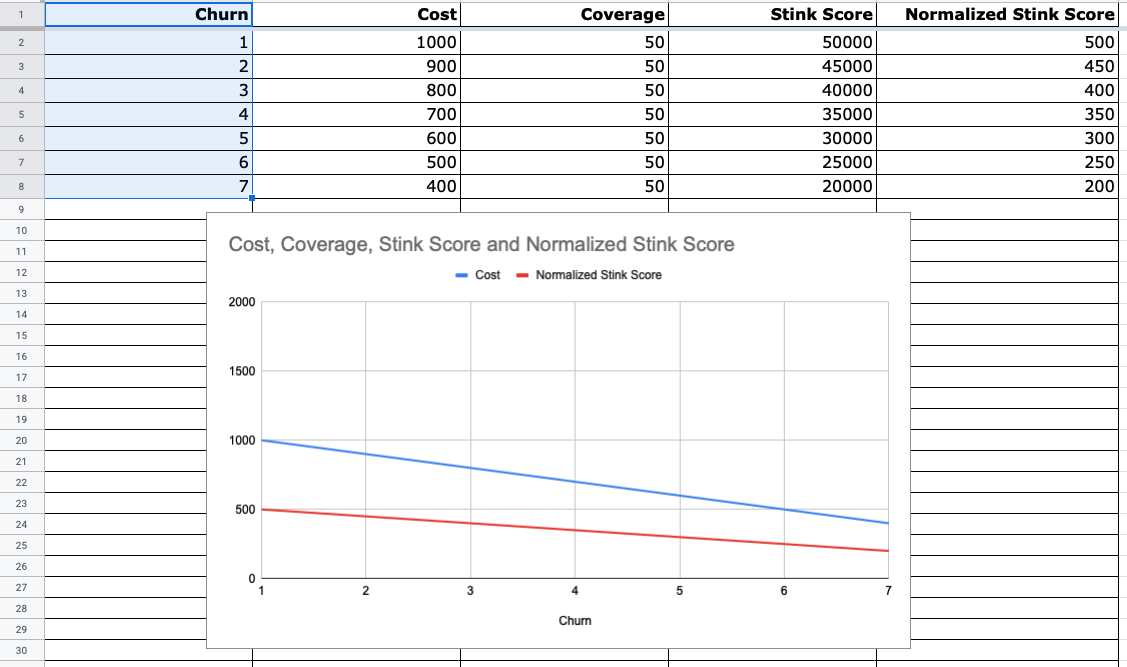 What does it look like if we make 4 changes to increase code coverage by 10% in every change?

If we are using version 0.3.0, this is what the stink_score looks like: 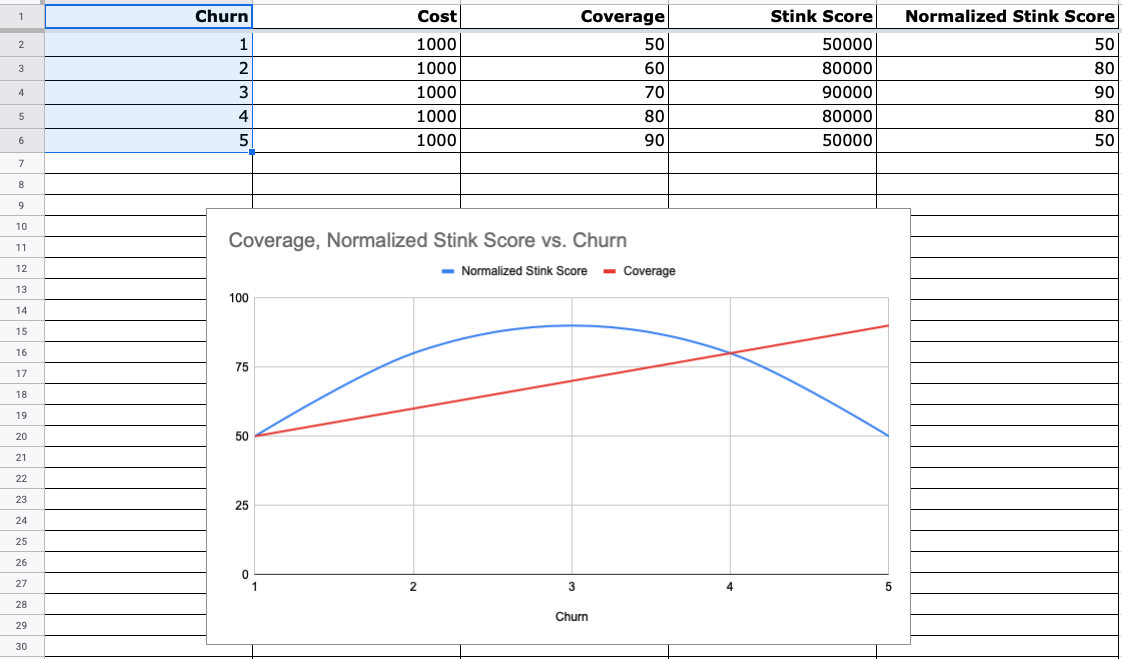 If we are using version 0.3.1, this is what the stink_score looks like: 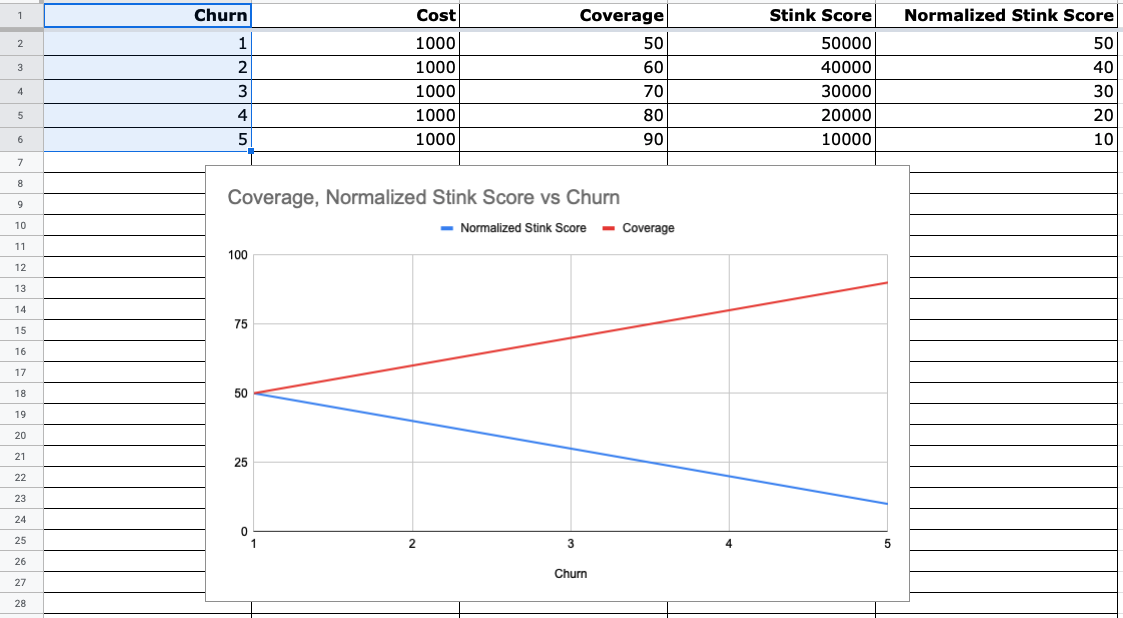 Fortunately I managed to fix my slides in time for my talk! You can watch my presentation at RubyConf over here:

I believe there is a lot of value in comparing stink scores between one branch and another. Getting out of the tar pit is no easy feat. You want to make sure that you're always making changes that get you one step closer to a truly easy-to-maintain project.

In the roadmap for Skunk, I'm really excited about a feature that will keep track of the stink score average over time. This metric can be our compass in this adventure out of the tar pit. If you see the average going up over time, you will know there is something wrong with your team.

In order to keep improving the tool, I plan to run it using well-established, open source, Ruby and Rails codebases. Which stink score do you want to see first? Let me know in the comments below! ❤️

The presentation I gave at SolidusConf was based on Skunk v0.3.0, so there is a mistake in this presentation:

I'm sorry about that, @SolidusConf and attendees! The good news is that it is a small mistake. It doesn't change much about the core of my talk.

Here are some of the resources that I used for this article: