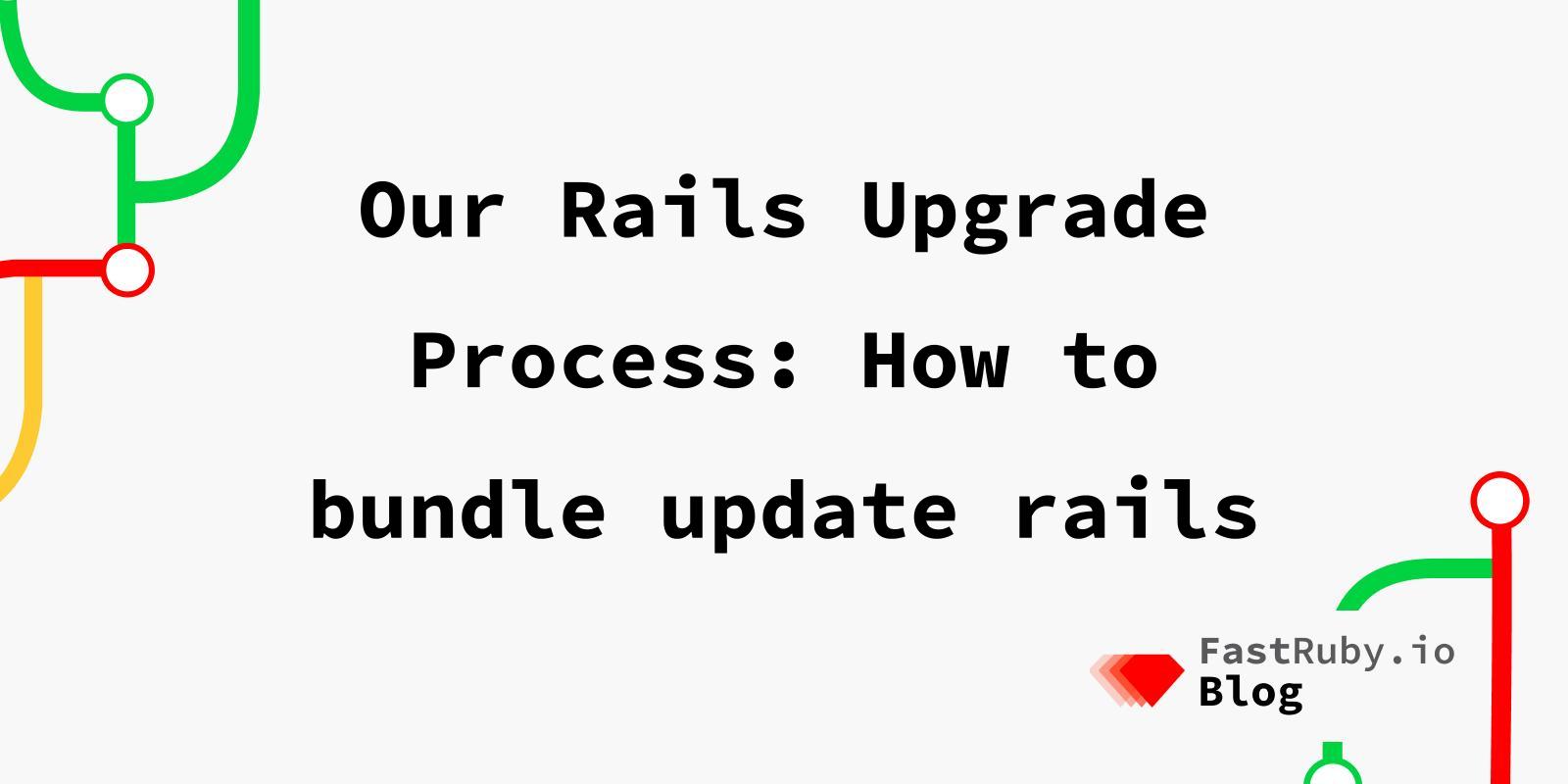 Our Rails Upgrade Process: How to bundle update rails

We know that there are many challenges involved in a Rails upgrade project. Depending on how big your application is, how old your Rails version is and how well structured your code is, it can be difficult to perform that job and keep your sanity. If you don’t find a reliable and trustable process to guide you from version X to version Y, you can end-up in a nightmare.

The good news is that here at OmbuLabs, we have been upgrading Rails applications for over 10 years now and this gave us a know-how to define a process that has proven to be very effective. And today I want to share Our Rails Upgrade Process with you.

The first thing we do is search for deprecation warnings in the application, they are log messages suggesting things that you will need to change when moving to the next version of Rails. That can be because something will either be removed from the source code or the code will work in a different way.

You might find these deprecation warnings by searching in the production.log or tracking them down in your Log Management Software, such as Sentry or Splunk.

You can also search for deprecation warnings in the test.log, so you can find them in your CI service as well.

For each different deprecation warning that we find, we create one story in our backlog software (at OmbuLabs we use Pivotal Tracker as we explained here to help us with that). This will make things easier to code review and to test in QA.

After creating all the stories for the deprecation warnings, it is time to address them one by one. Deprecation warnings are usually pretty straightforward, the messages are clear about what needs to change. They are also backwards compatible which means that you can fix them and merge directly to the current version of Rails.

Good examples are the deprecation warnings caused by the changes in ActiveRecord::Dirty in the Rails 5.2 version. We wrote this article awhile ago showing how to address them.

To help us switch between the current Rails version and the new one, we usually create a dual boot mechanism. The fastest way is to install the handy gem next_rails. Please, visit this article where we showed how you can install and setup the gem in your local environment and your CI server.

Dual booting is a helpful strategy that you can use in all environments:

There are some caveats with the dual boot though. If your test suite takes three hours to run, for example, it will double your test suite run time to 6 hours. So then it is not a great idea to run both versions every time. In those cases, we usually run a nightly build with both versions (master and rails-next-version branches).

Step 4: Assessing whether we can upgrade a dependency or not

After shipping all deprecation warnings fixes to the master branch and setting up the dual boot, it’s time for us to work on the project dependencies.

Sometimes dependencies are backwards compatible with the current version of Rails. Within the libraries, you will find code that looks like this:

If that is the case, then you might be able to just upgrade the dependency using bundle update.

If the dependency does not have backwards compatible code, then, using the next_rails gem, we add something like this to your application’s Gemfile:

This is the method definition for next?

And all it does is to use a symlink called Gemfile.next in order to keep a separate lockfile for the new Rails version: Gemfile.next.lock

In cases when we can’t just update the gem’s version, we have four alternatives:

You can learn more about that in this other article that we recently released about Unmaintained Open Source Projects.

After adjusting all the dependencies in the application for both Rails versions, we create the rails-next-version branch with all the dual boot code and open a PR that will target to master. The idea is that from now on, every PR that we create and we can’t merge to master directly, will target to this rails-next-version branch. As you can imagine, this big PR won’t be merged until all necessary changes to the upgrade are done.

This helps us deliver small testable changes during the upgrade and keep a stable branch that we can use as base.

Step 6: Create new branches for each update that is needed

At this point if we run the test suite using the Rails 5.2 changes, it’s a probability that a bunch of tests will fail. It’s time to address them and open a pull request for each one or for each file or feature, depending of the complexity of the changes.

Sometimes there will be little snippets of code that you can write to make the changes backwards compatible, they are called rails upgrade shims

Step 7: Making sure that everything works

When updating the application we always hope that we didn’t break any behavior, and even with a reliable test suite, we know that normally there are visual issues that only come up when you do a “real integration testing”. That’s why we always do quality assurance and deploy the code to a QA environment.

That work usually is done with the help of someone from our client’s team or by their own QA team.

If all changes are done and we have everything working in the rails-next-version branch, you can finally take a breath! It’s time to merge the rails upgrade PR and celebrate.

And that is it!

If you want to understand more about our upgrade process, please visit FastRuby.io. And if you have any question we would love to reply to you here in the comments section!