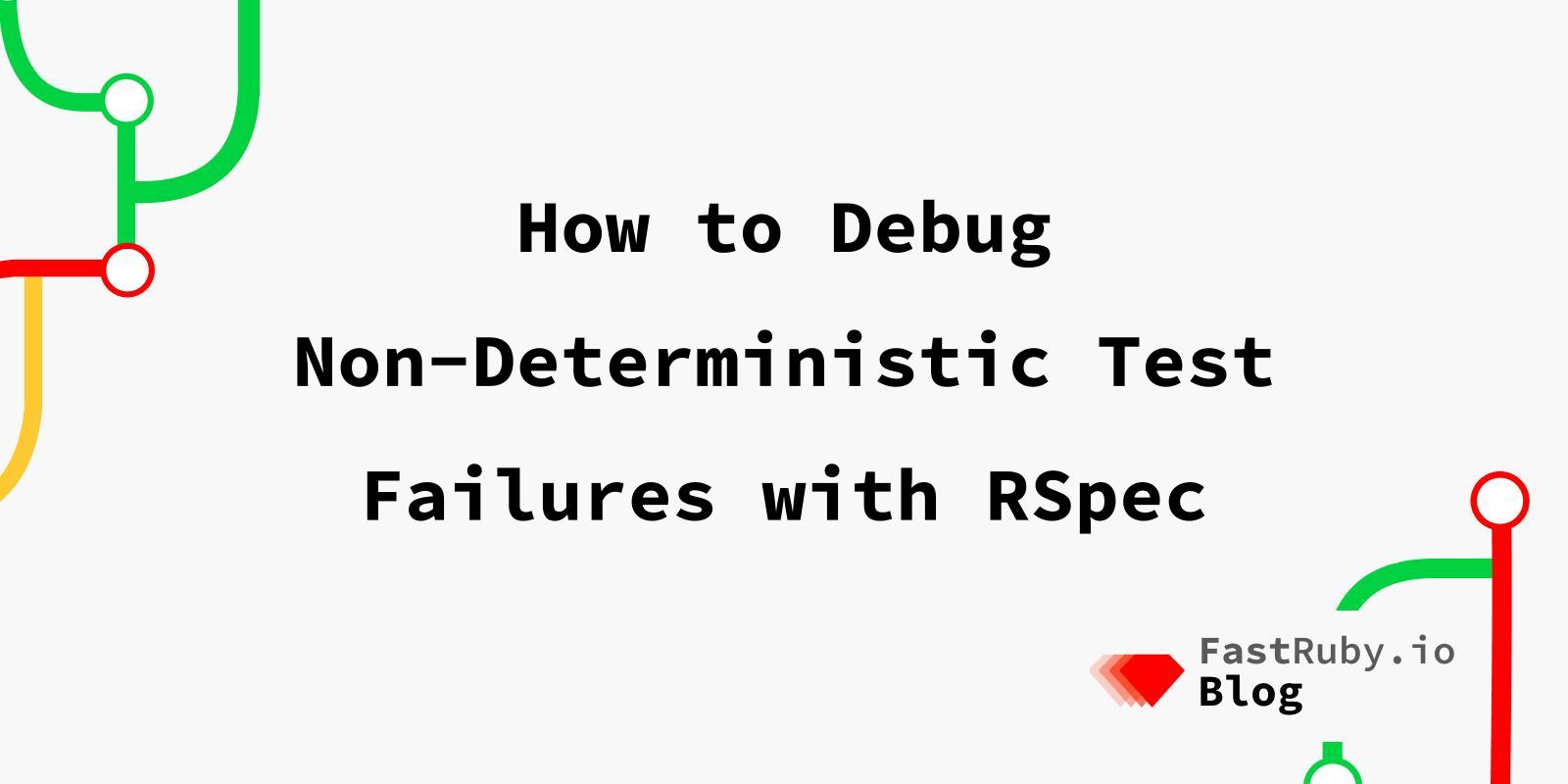 How to Debug Non-Deterministic Test Failures with RSpec

I recently wrote a spec for metric_fu which accidentally introduced a non-deterministic spec (a flaky spec!). I had no idea why it was randomly failing. This is an article to explain the process I followed to debug this issue.

The test that I wrote was testing the integration between metric_fu and reek. When I started I wasn’t familiar with neither of those projects’ codebases, so bear with me.

This is the code that randomly worked/failed:

Why did I write that spec? I’m glad you asked.

After bumping the dependency for reek I noticed that generator_spec.rb was working just fine, which was a little suspicious. This lead me to believe that there was no real “integration spec” for a very simple scenario.

If you don’t have a CI failure to refer to, a quick and basic way to test a flaky spec is by using this bash line:

Sometimes the result returned by reek is an empty result set!

Non-deterministic results have always been hard to debug for me. Fortunately metric_fu is using RSpec and it had the right setup for me to start digging into it.

The important part there is the line where it randomizes the execution of test scenarios. If you don’t do this in your specs, you are at risk. The risk is that your scenarios will only run in a very specifically defined order.

The problem with this is that some scenarios might be leaking state into another scenario without you knowing it. This is a ticking time bomb. In the near future you might write a scenario which alters the execution order and starts causing random looking problems.

I strongly recommend you always run your RSpec tests in random order.

Moving on, when you specify random ordering in your RSpec configuration, its output will show the seed number at the end. For example:

Then you can use that seed number to replicate the execution order that RSpec used to run each test scenario:

If you combine that with byebug (or pry!), you can start debugging the flakiness with the right state.

At this point, RSpec executed all my test scenarios in a particular order that will cause that flaky spec to fail. That is good news! (Reproducing a flaky spec is always great!)

Within the configuration file (spec/spec_helper.rb) I find these lines:

My working hypothesis now is that run_dir sometimes is one thing and other times it is another, depending on the load order of RSpec’s test scenarios. I find that MetricFu already defines a namespaced method called run_dir:

I run my test suite:

Unfortunately that did not solve the problem. The flakiness remained:

I check once again and Dir.pwd is sometimes one thing and other times another.

So, as usual, flakiness seems to be related to “leaky state”. After some digging I’m 80% sure that leaky state is coming from MetricFu.run_dir.

Any sort of modification to that “global” variable in one scenario will leak into other scenarios if you are not careful.

So I decide to address this problem in two different ways:

I add this utility method:

This allows me to run MetricFu report generation code within a specific directory and not leak state.

I get rid of the problematic before(:suite) block.

This generates a couple of failures in the test suite, which I decide to solve by calling the MetricFu.with_run_dir method when needed and moving files from spec/dummy to spec/support.

These are some tips you can use next time you run into a non-deterministic failure. I know that “leaky state” is not the only root cause of flaky specs, but it’s probably the most common root cause.

I can now confidently say that I know a little more than nothing about reek and metric_fu’s source code. Here is the pull request with all the changes: https://github.com/metricfu/metric_fu/pull/306

Check out the next section if you want to learn more!

Others have written about this topic extensively, so if you are interested in knowing more about flaky tests, I recommend you read further: