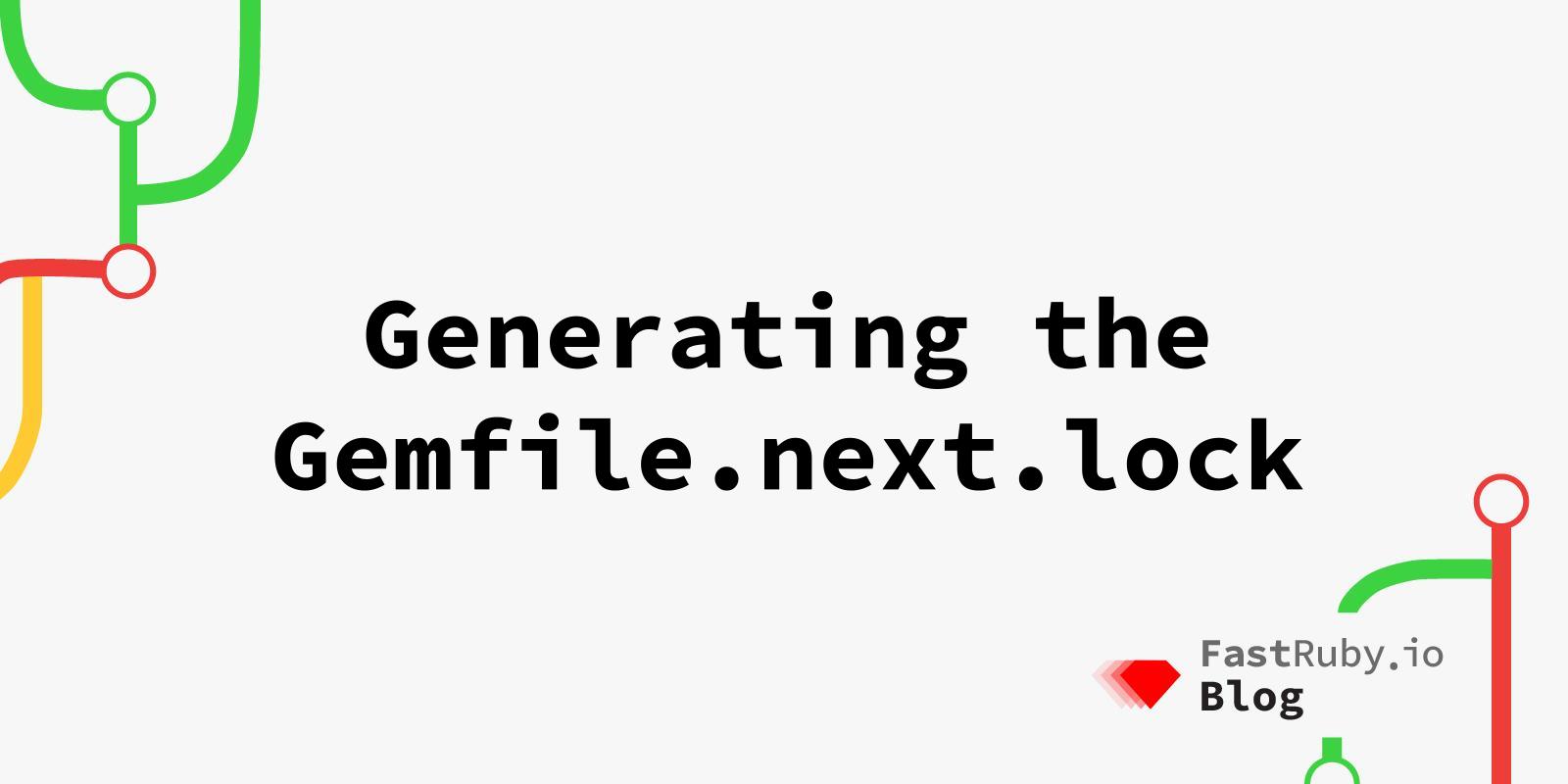 At FastRuby.io, we recommend using the Dual Boot technique for upgrades. This requires us to generate a Gemfile.next.lock file that will be used to boot the app with the next version or Rails. In this article we’ll share 2 techniques to generate this file: the faster one and the safer one.

This is the easiest one. The steps are:

If you are not using next_rails, you can run BUNDLE_GEMFILE=Gemfile.next bundle install instead

This process will generate a new Gemfile.next.lock file from scratch. It will let Bundler resolve any dependency needed for the next version of Rails with the restrictions defined in the Gemfile and it will use the latest version of each gem that matches the requirements.

There is a problem with this approach, a lot of extra gems will be updated along with Rails and its dependencies, so you are not only upgrading Rails, you are also upgrading any other gems unrelated to the upgrade itself. Upgrading more things than the minimum needed can lead to more failures if the upgraded gems happen to introduce changes that require extra work.

This may be a bit harder to do (not always, though), but it ensures that only the gems related to the upgrade are updated and nothing else. Those other gems can be updated at another time. The steps are:

This process will generate a Gemfile.next.lock file keeping as many gems as possible in the original version and updating only the ones that are strictly needed for the Rails upgrade. We have to help Bundler to decide which gems should be updated.

This approach can take more time and requires more manual input if Bundler can’t resolve the dependencies, but the result is more conservative. We’ve seen that many failures during upgrades are introduced by unwanted gem updates when using the faster approach. This safer technique will take some extra time at the beginning but it can potentially save hours of debugging.

Let’s see an example generating a Gemfile.next.lock file for Points using a really old commit of the code, starting with Rails 5.2 and dual booting with Rails 6.0.

This was the Gemfile back then.

Now let’s roughly compare the changes introduced for the Gemfile.next.lock with the two approaches.

Diff between original Gemfile.lock and Gemfile.next.lock using the conservative approach:

Diff between original Gemfile.lock and Gemfile.next.lock using the fast approach: 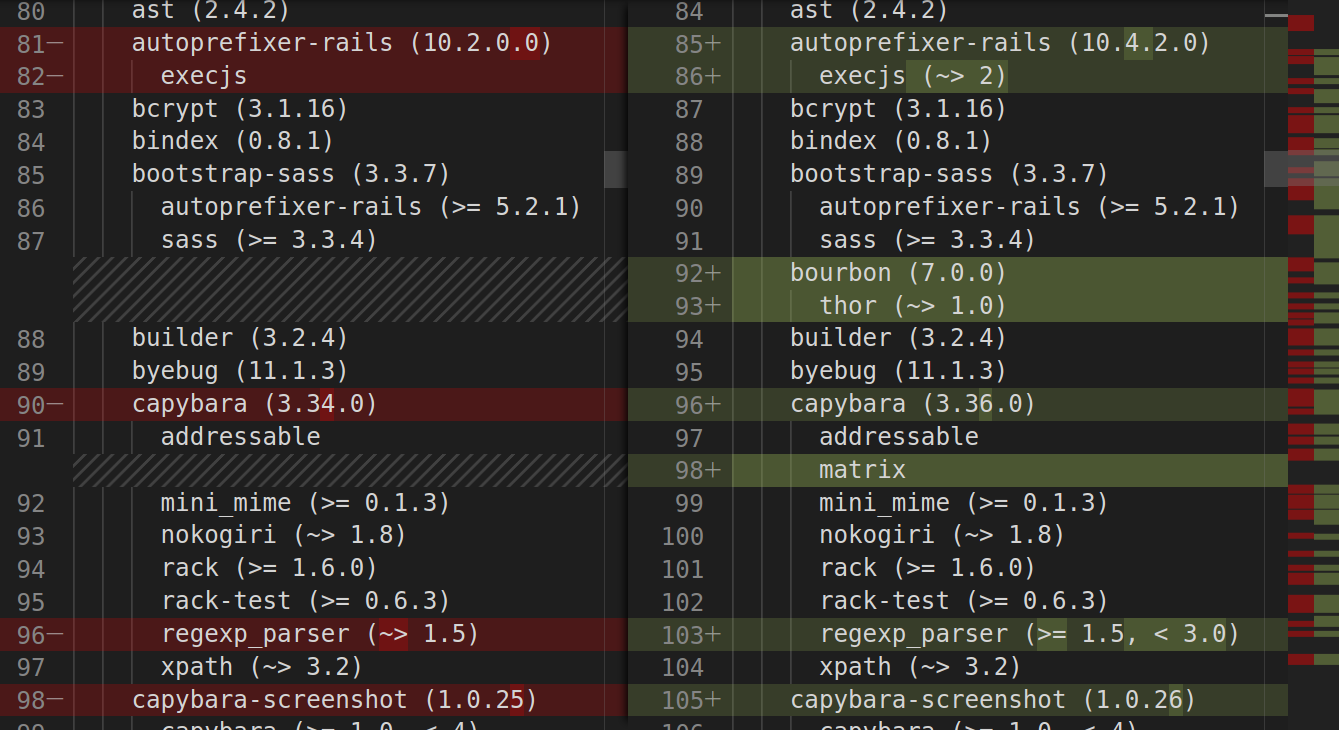 We can see that, even in a really small section of the file, the fast approach includes upgrades for a lot more gems than the safer approach, even a major version jump for database_cleaner for example. We can compare the diff that shows at the right side of each image to see how much more red and green there is for the second diff.

Depending on the dependencies listed in your Gemfile, trying to upgrade only the rails gem can generate conflicts, because Bundler will only update rails and it’s dependencies when possible but it won’t update other gems that may depend on different versions of the same dependencies.

When we encounter these errors, we have to go from top to bottom analyzing the reason for each conflict Bundler reports.

For example, in a different application upgrading from Rails 3.2 to 4.0, when running the next bundle update rails command, Bundler shows this error message:

In this application, the Gemfile has a conditional to use different capistrano versions:

So we have to include capistrano in the list of gems to upgrade:

After fixing that issue, new conflicts may show up. The reason for the failure must be analyzed to know which gem update will fix it. In some cases it may require an update of the Gemfile to use different versions of a gem (for example, if we have a version restriction that is too strict for the new Rails version, so we need a conditional to loosen the restriction for the next version). Then, with the identified gem, we run the bundle update rails capistrano ... command.

Each gem added to the list should reduce the number of conflicts until the bundle update command completes successfully.

We recommend using the conservative approach, especially in applications with a large number of dependencies. But you can see in the example using Points that, even for fairly small projects with not many dependencies, the number of updated gems is something to consider.

It’s hard to share a metric for how many problems updating all possible gems can create and how that compares to the time doing the conservative update of gems, since it depends on too many things (size of project, number of dependencies and its dependencies, how complex the code is, etc). But, in our experience, it takes a considerably longer amount of time to debug failures than to take the time to help Bundler resolve the dependencies.

Dual Booting with Engines and Gems